This painting is called Reach. It came from a conversation that several of us had about: “Everything that we have, we reached for, everything we don’t have, we didn’t.” And that carried on for a while, and then I suddenly got this vision, doing dishes of all things, and it only lasted for maybe three or four seconds. It was so intense, and it was so complicated, that I had to put it aside for almost 10 years before I had the nerve to paint it. However, by the time I got around to doing it, it was just like any other painting, so essentially I lost most of my fear in this painting, that’s one reason why it’s one of my favorites.

All these people are in the shadows, all of us are in the shadows, because even though we may be successful, or rich, or poor, or educated or whatever, we’re still in the shadows because there’s a few elements that are missing from our lives. One is empathy, and then compassion, and non judgement, and forgiveness. So, I try to incorporate as many feelings as possible, like people reaching for something, and out of 200 hands there are only four who’ve seen the light and are reaching for it.

This person has given up, this person has failed, and these hands are trying to pull this one hand reaching for it, back, afraid of death. There’s people trying to get together, there’s people praying, there’s idols, there’s fame with the idol worshipers, there’s anger here somewhere, there it is, and there’s another restrained anger. And just a have a little fun. A lot of people think that this is God, but it’s actually your full potential, and that may be God, I don’t know. I spent a couple of months on the bottom, laying on the floor, on this one, putting in the pebbles and the shadows of the four hands that come out. This is the strongest, he’s reaching desperately for the light, but these hands are pulling it back into the shadows. And those hands may symbolize family, friends, work, religion, anything.

So, when up the nerve to do it, I went to a manufacturer of canvas and got a 10 foot by 7 foot, actually a little larger than that, canvas, drug out my oils again and my brushes. I probably went through two or three dozen brushes on this. I finished it in 1990, on Christmas morning, I figured that would be a good Christmas present. And now, well now you can own a piece of that vision, ideal and history, in high quality Giclée print format. 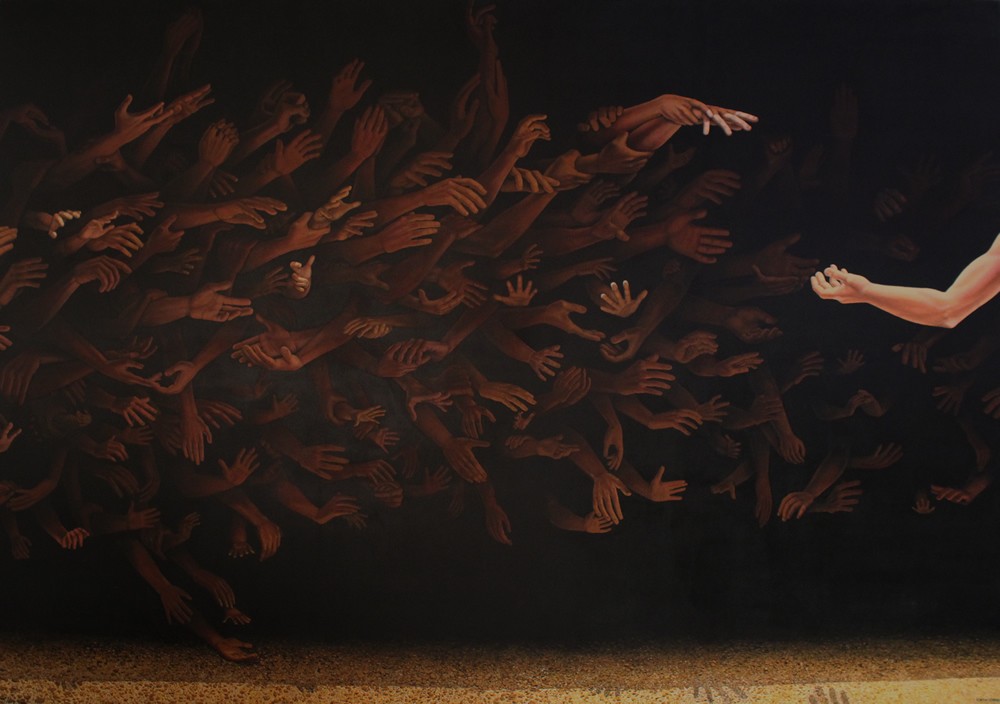